...and again the volume control.
Well, how long can one suck up some schemes for replacing a variable resistor?
It turns out, yes, it is possible. And schemes for replacing a variable resistor in the format of the volume control method will appear for a long time to come. The diagram below has been seen, if not by everyone, then by many. Also, many assembled it on their knees or on a breadboard, some, like me, assembled it in a finished device. I have this circuit used in a germanium amplifier on 1T910AD

The scheme is simple, the main thing is to find acceptable optocouplers. And optocouplers are also not a problem - you can find an analogue without problems and buy original ones. 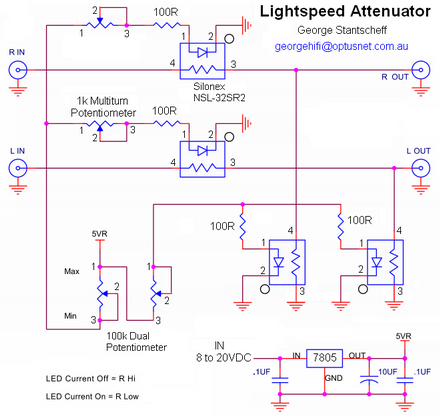 Question: if the circuit is the simplest, repeatable, then what's the catch? Why is it not used often? Or even why it is not common in amateur radio designs? There is a nuance: the law of change in the resistance of the optocoupler resistor. It's definitely not logarithmic, but it's not linear either.
To be sure of the law of change in resistance, a microcontroller is applicable, which will select the brightness values for the optocoupler LEDs. But before that, let's digitize the logarithmic curve, get a set of values ​​​​(255), from which we select some sane number of points (100), which will be the brightness values.

The use of a microcontroller makes it possible to choose a method for adjusting the volume: you can use a decimal logarithm, or you can use a natural one. For aesthetes, perhaps, the binary-logarithmic dependence is also suitable. In the next firmware version, it will be possible to switch the volume control method on the fly.