The author page for this device is here.
All materials on this design can be found on his page. There are two options for a 3.5 "drive emulator - on an SD card (which I repeated) and with a USB interface on ALTERe.
It is also very useful to read emulator forum. There is an English section.
Here I give only what concerns my version of this design.
I soldered this emulator specifically for my ZX Spectruma.


A few words: PIC18F4525 has been replaced by PIC18F4620 (according to the conclusions, it is the same as 4525 and there is more memory). In the circuit in the voltage divider for the SD card, the resistances of all resistors have been changed (counted down). Well, he spread his printed scarf, in the author's version the signet was too big. I forgot to mirror the floppy connector, and as a result, I had to solder the connector for the drive from the side of the printed conductors.

Using the utility img2hfe.exe - already version 1.3.7.0 , (it is also on the author's website) we convert the images of SCL and TRD. Write them down on a card. We paste. Turn on. We select the required image with two buttons and install with the third button. On the spec, press LOAD and enjoy. By means of a jumper it is possible to install divodov A, B, C, D. The emulator understands cards including 32GB.
Using the HxCFloppyEmulator.exe utility from the same archive (link above), we can now convert the HFE image (which we can modify on a real Spectrum) back to the original *.TRD image. First, convert to *.IMG image, then rename this *.IMG image to *.TRD and everything is ok. 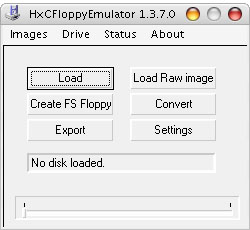 Converting images. Specify the "Source" folder - from where we take *.TRD and *SCL and in the next line specify the "Target directory" folder - where we put *.HFE images for subsequent recording on the card. Click the "Batch converting" button. 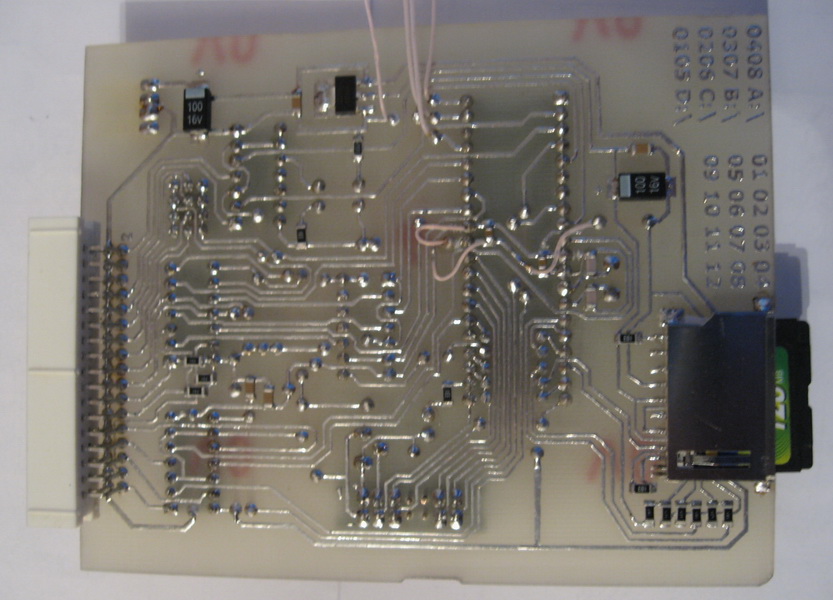 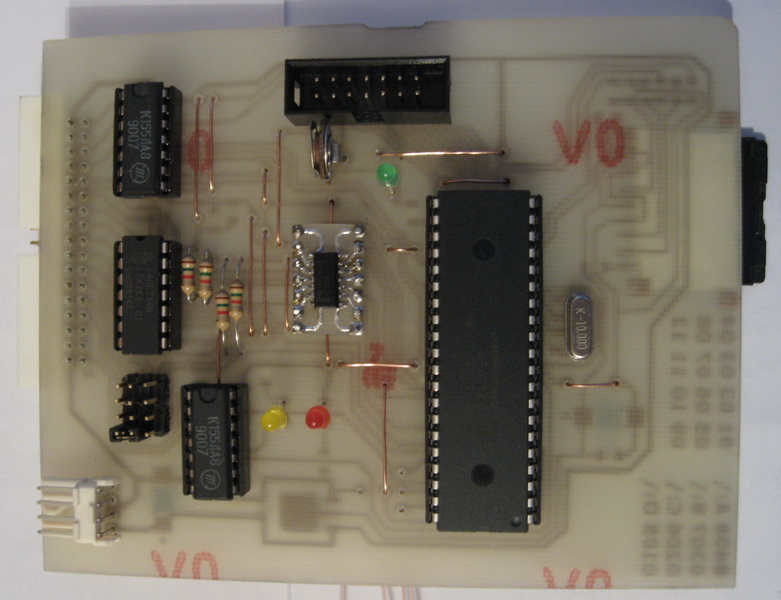 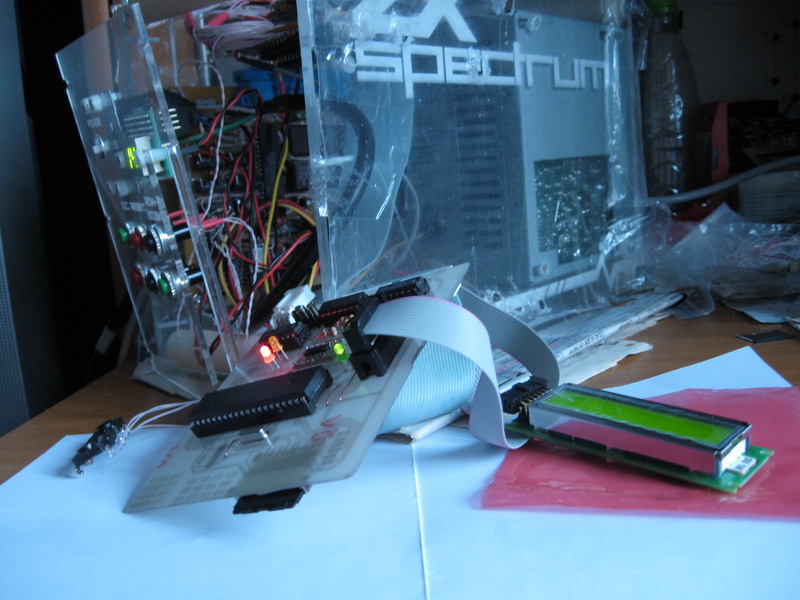 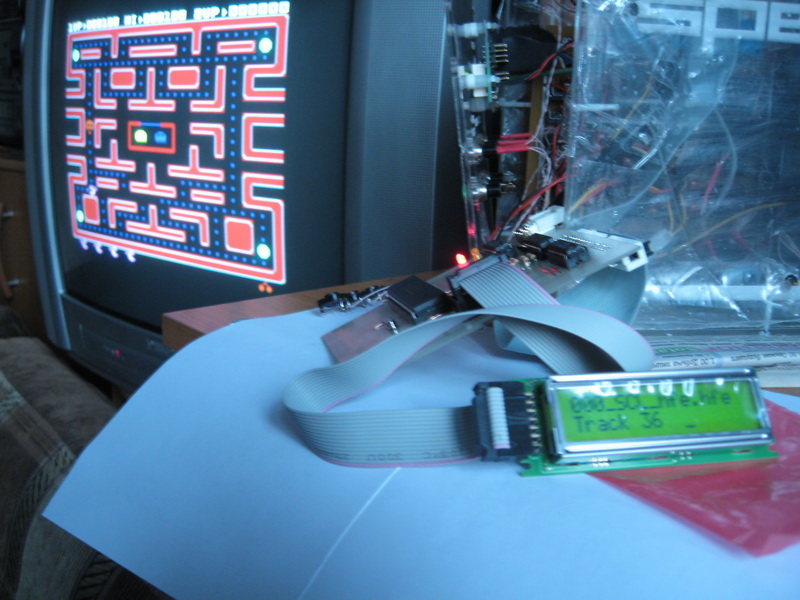 Downloading the archive. We unpack. Read README.txt carefully. We do everything as it says...

The floppy emulator is based on the PIC18F4525/4620 controller. We make a PIC programmer. I use the PIP-84 programmer and the WinPic program. 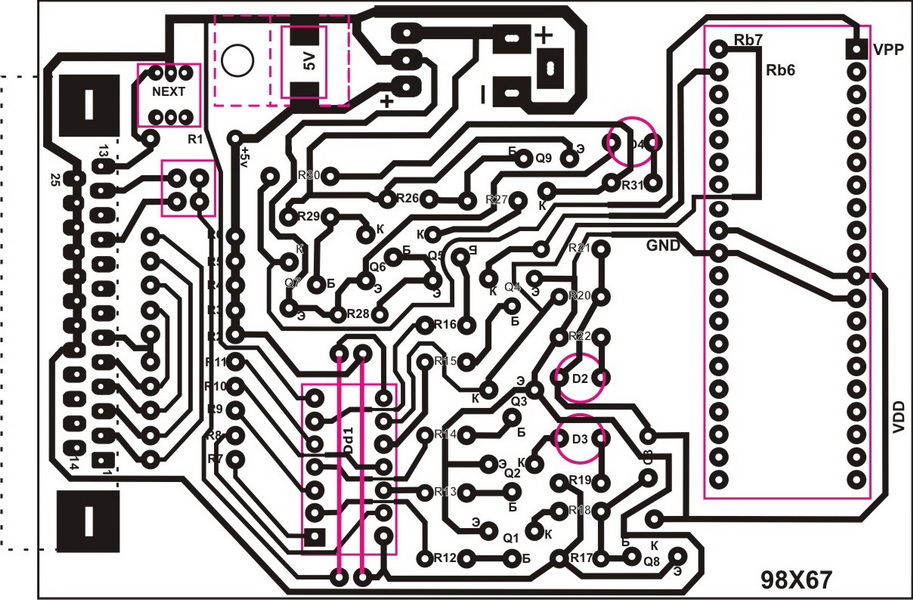 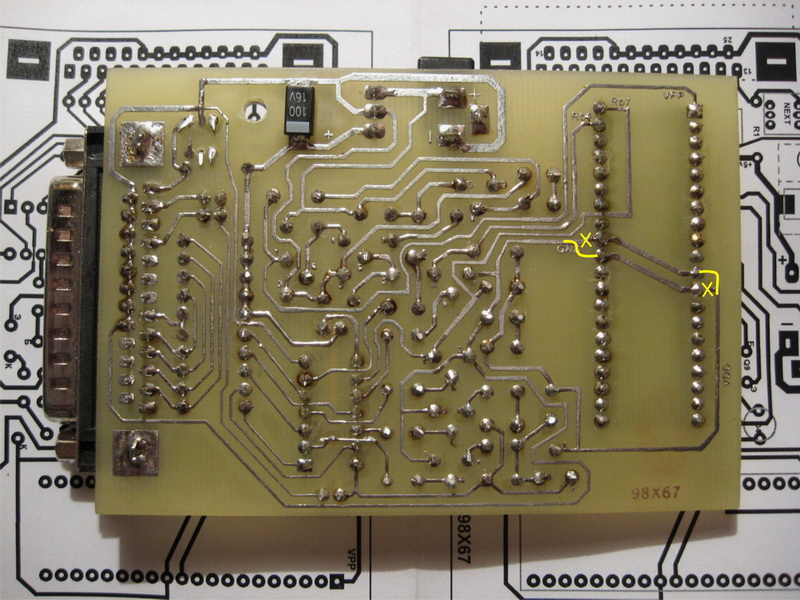 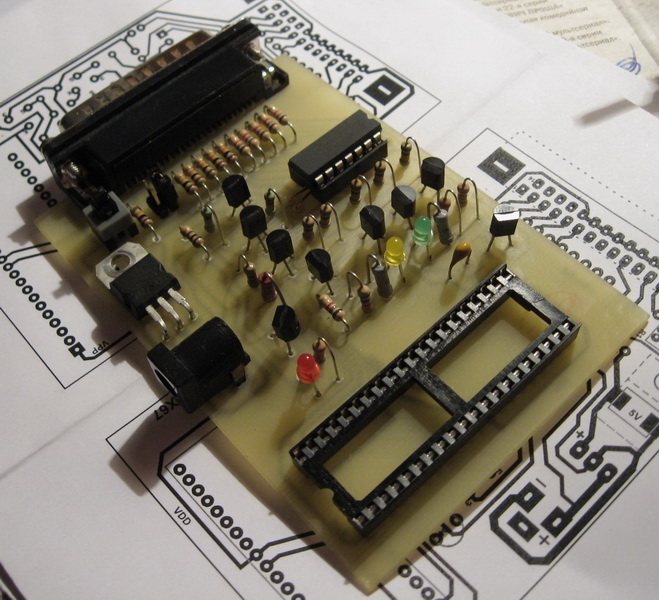 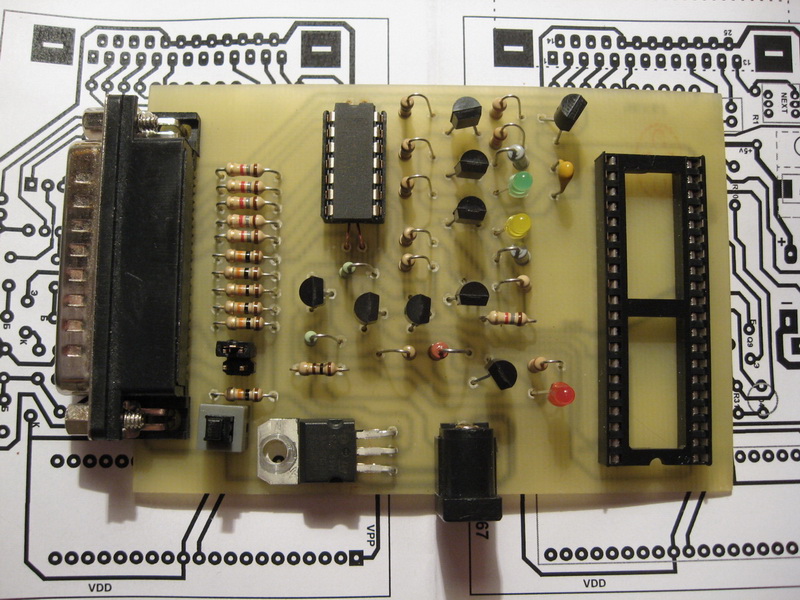 A few words: the LM317 stabilizer with strapping (R23, R24, R25) was replaced with a 7812 stabilizer, two 2D213 diodes are included in the common wire, which raises the stabilization voltage from 12v to 12.5v. Until 13v, I did not raise the voltage, because. and at 12.5v PIC16F84A sews perfectly (yes, even 12v would be exactly enough, or even 9.5v). The 7812 stabilizer, together with the power transformer, diode bridge and filter capacitors, are made in a separate case, from where 12.5v is supplied to the programmer. On the "large" PIP-84 diagram, the values ​​\u200b\u200bof the elements that I installed in my version of the programmer are indicated in bold. Chip 74HC14 is replaced by 74HCT14 for more stable operation. The difference between these two microcircuits is the presence of a Schmidt trigger at the inputs of 74HCT14, which was successfully replaced by 1533TL2.

As ​​they say, less than a year has passed... I decided to rewire my version of the citizen's drive emulator board from France in order to optimize and reduce the size of the board itself. What for? This is due to the fact that I collected (exactly like a dozen more people from the forum) a new computer ala ZX-Spectrum, namely ZXM-Phoenix, you can see the photo here. I don’t give the emulator scheme, it has not changed, it is at the top of the page. Next, the board layout and photo. 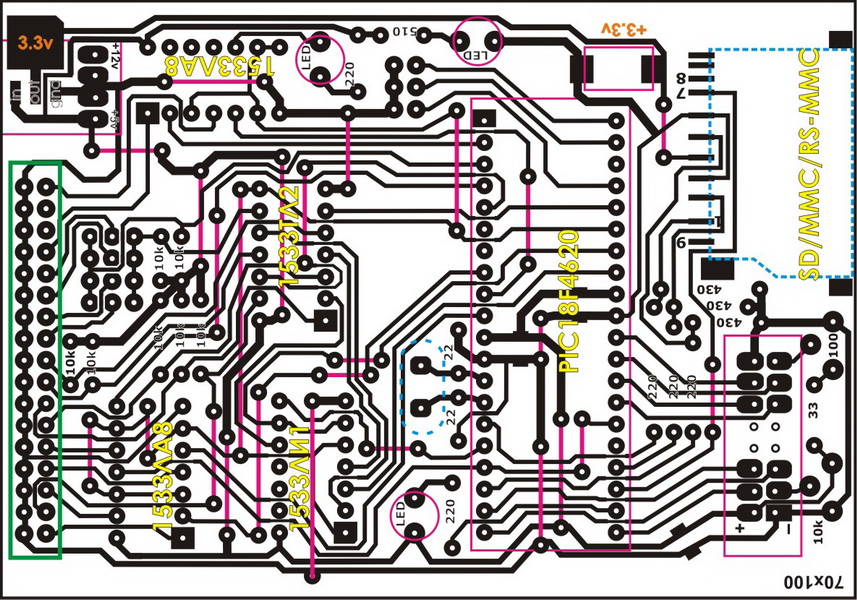 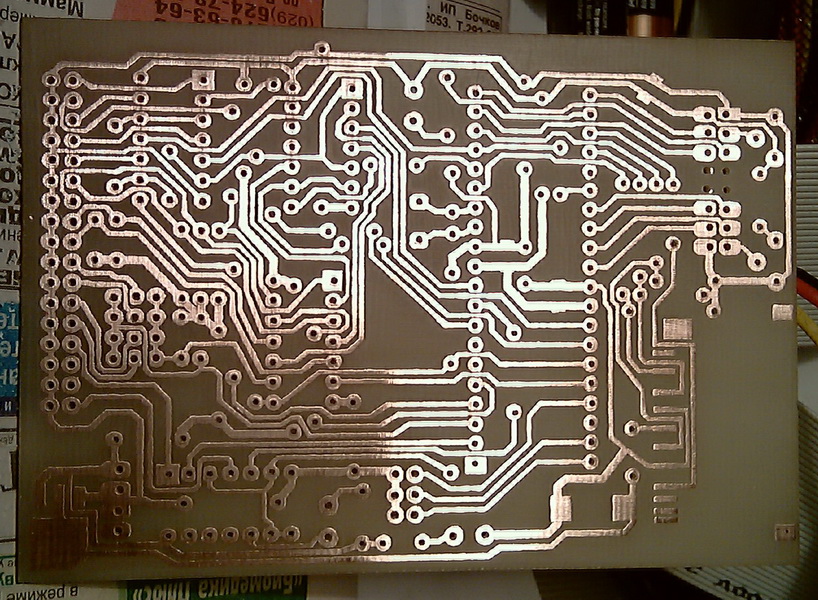 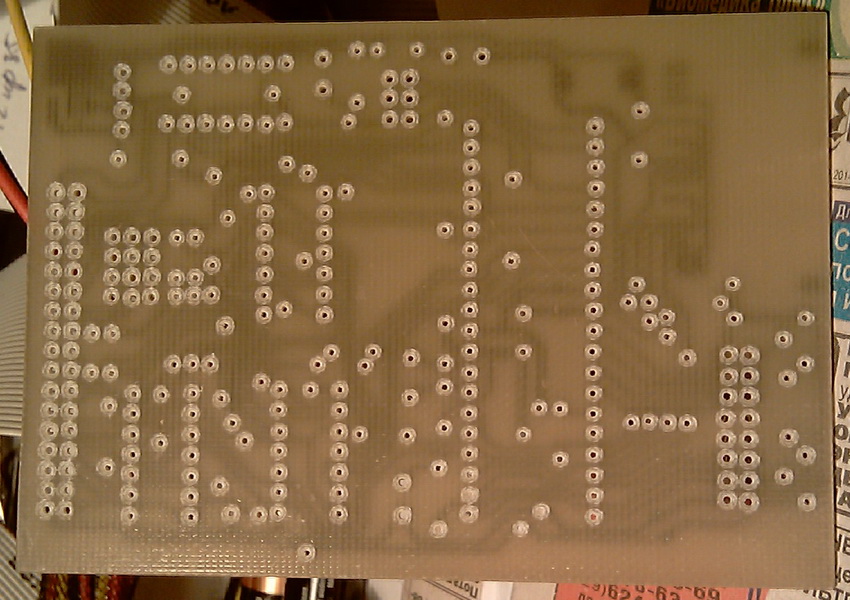 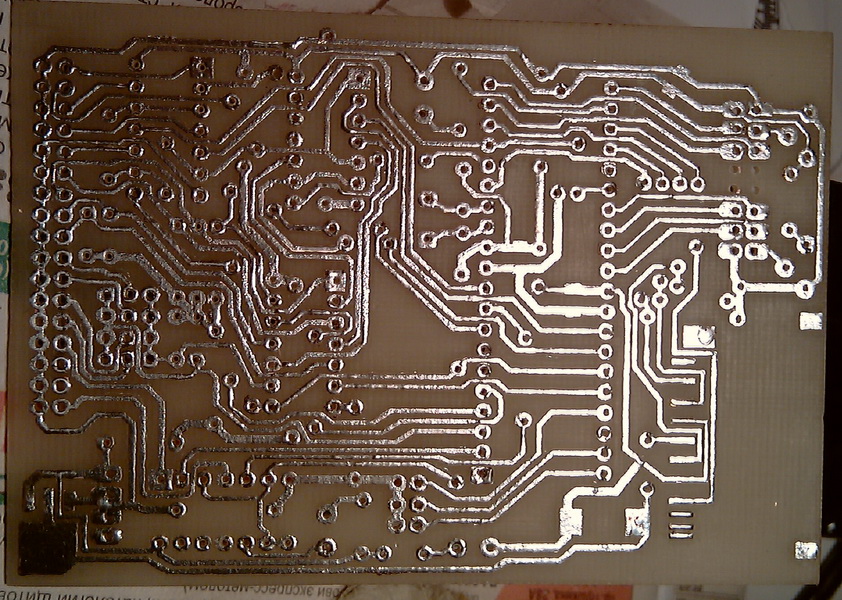 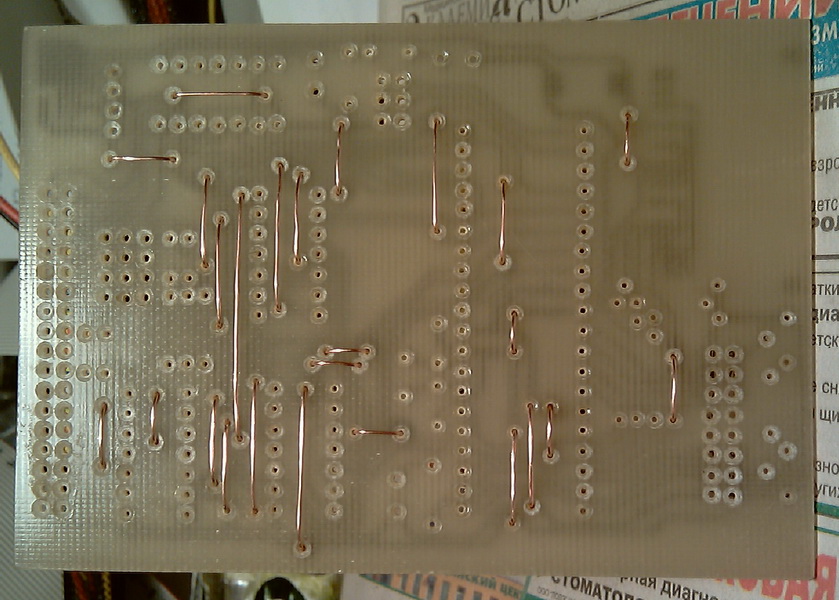 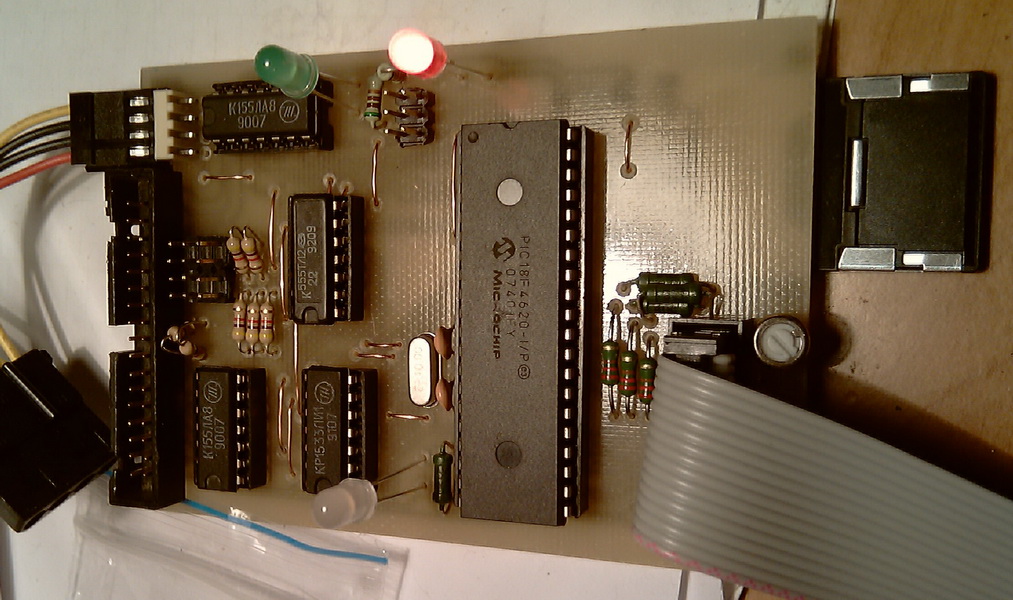 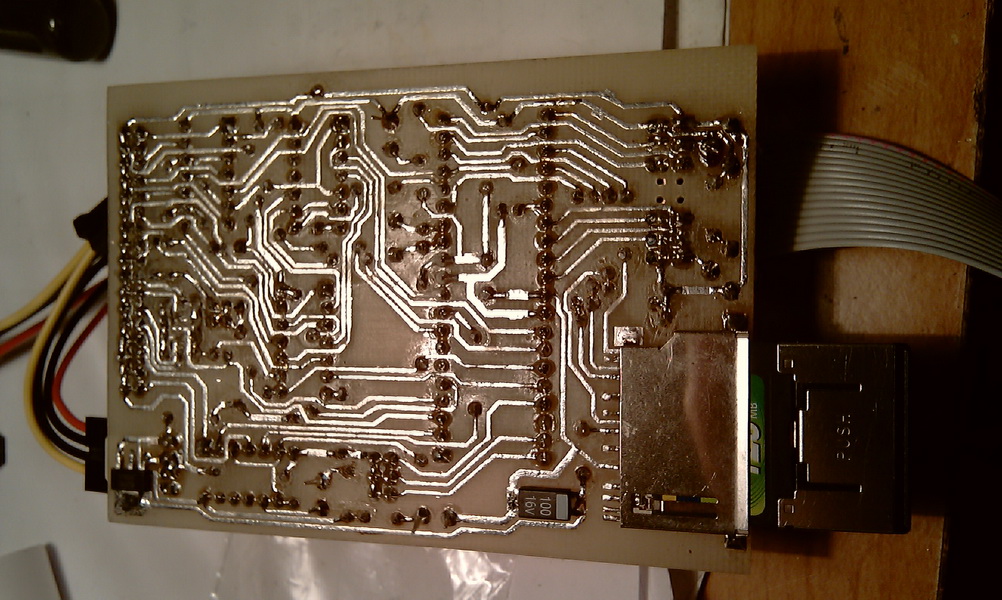 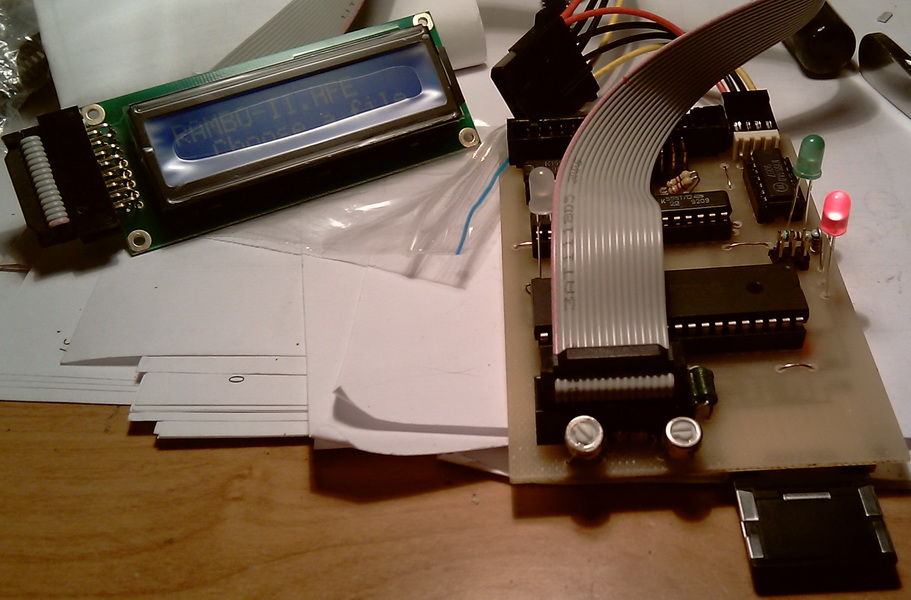 The WH1602C LCD indicator is used, the pinout from the SC1602 indicator differs in power and the number of pins - there are 16, and the SC1602 has 14. Therefore, look carefully - the pinout of your indicator may differ! Especially pin1 and pin2 (power)!!! Carefully soldered, checked for snot and short stacks, scratched dubious places with a needle just in case, flashed the PIC, inserted all the microcircuits, applied power and made sure that the emulator was fully functional by connecting it, for example, to the ZX-Spectrum or PC. LA8th and TL2th replaced with series 1533.
All Soviet microcircuits are used - KR1533LA8x2, KR1533TL2x1, KR1533LI1x1.
A few final photos and about the emulator, that's all. 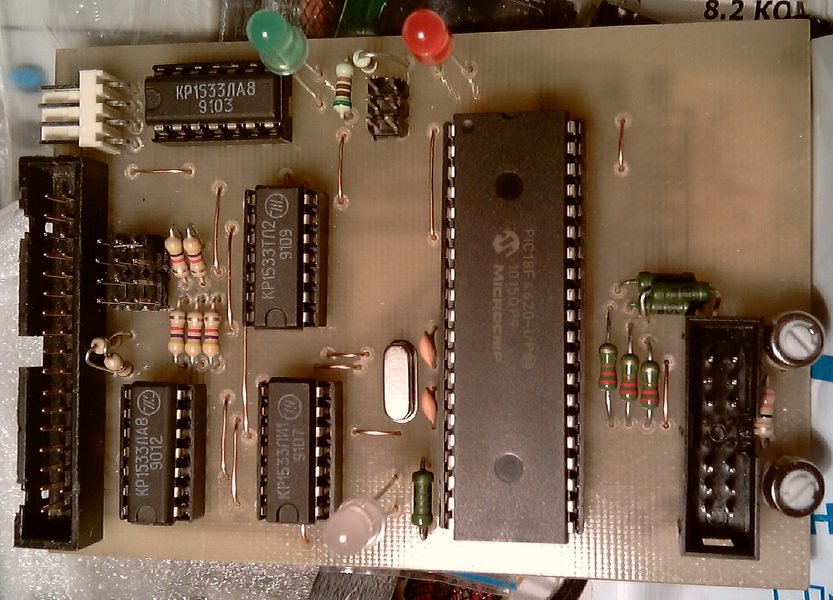 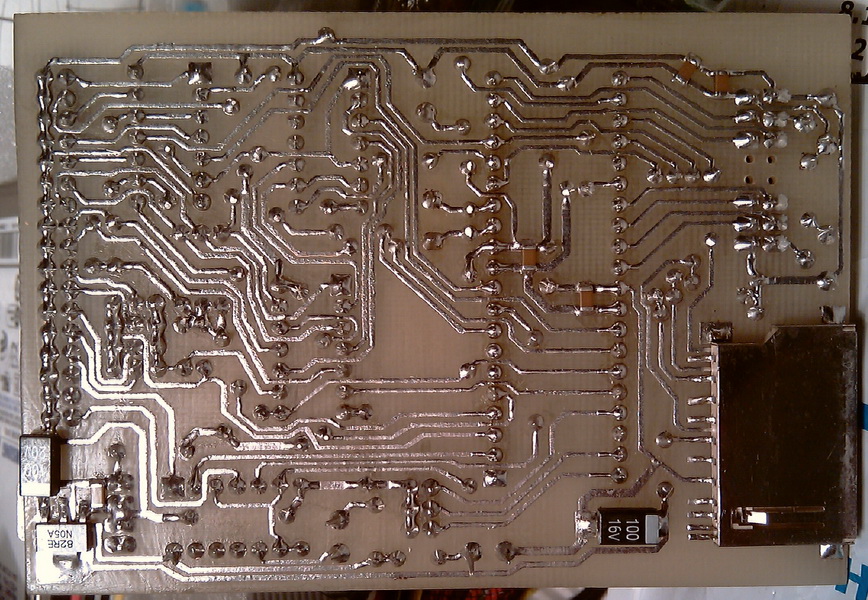 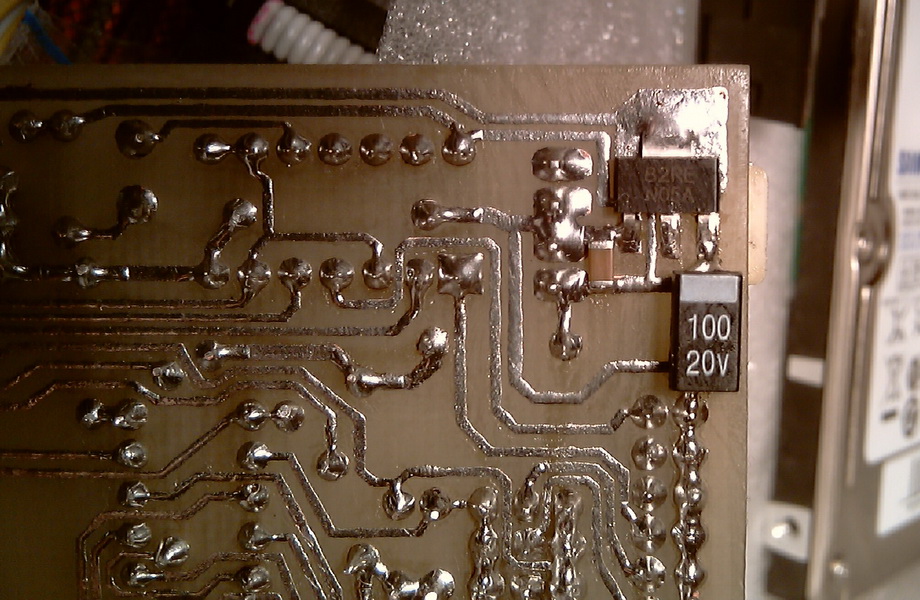 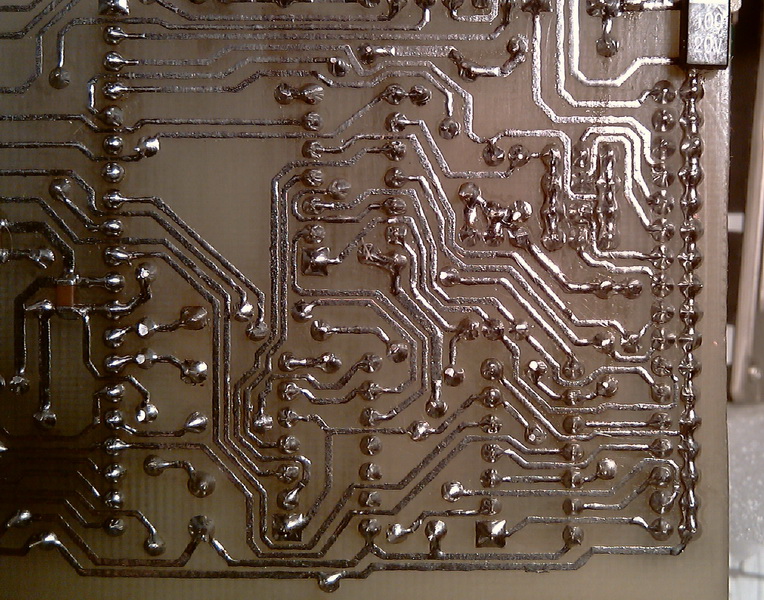 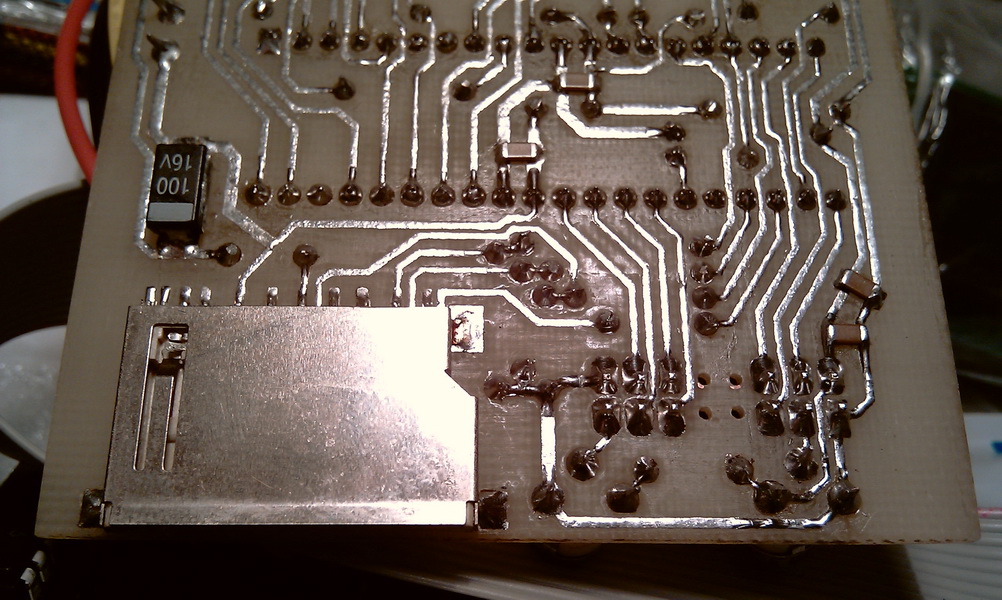 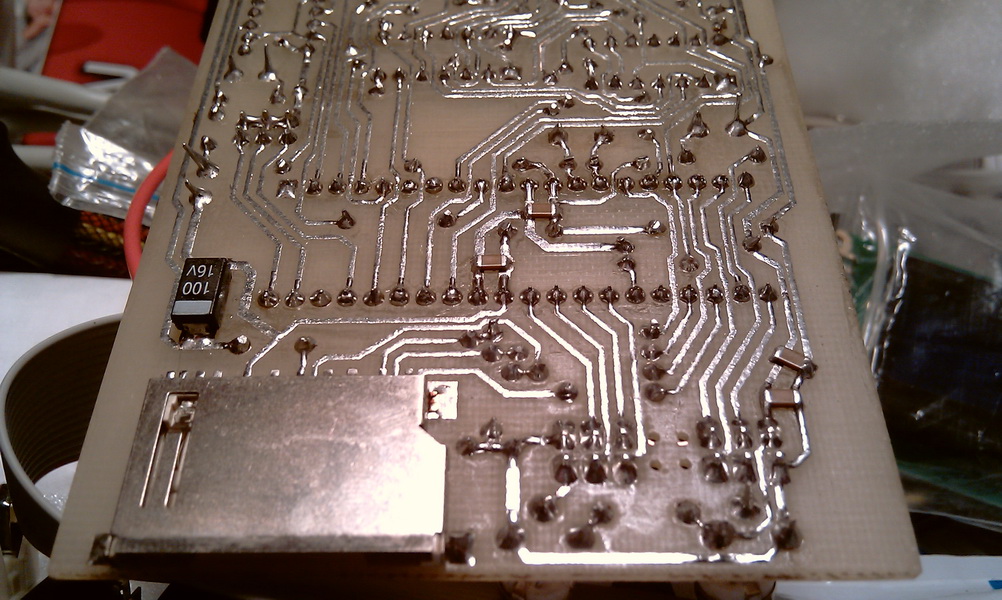 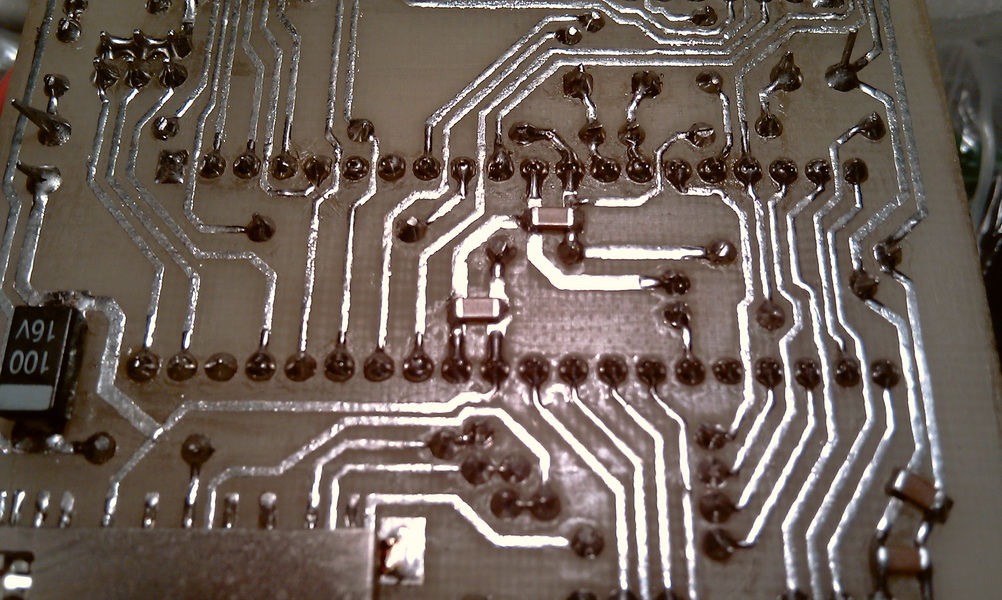 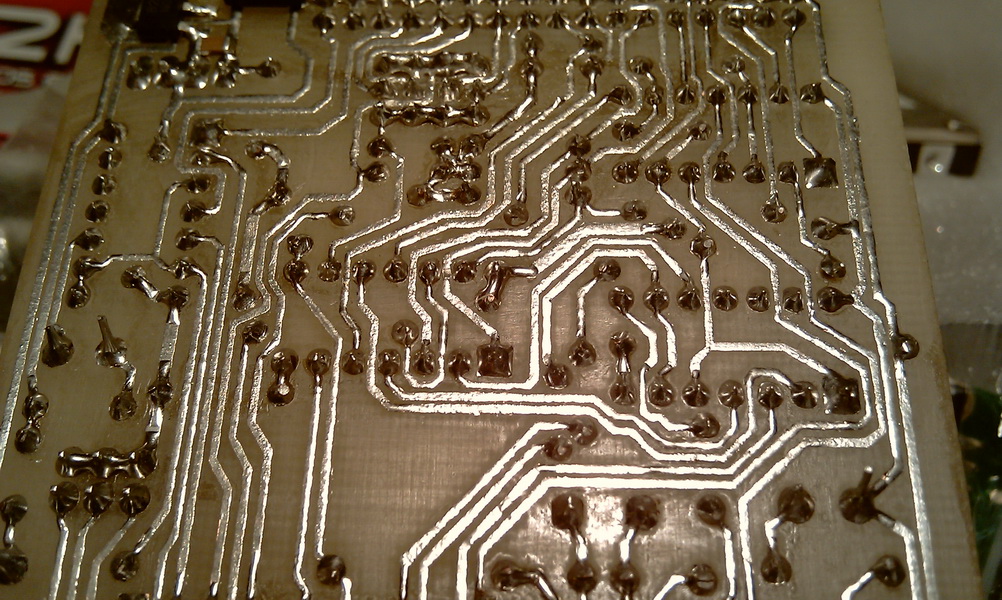 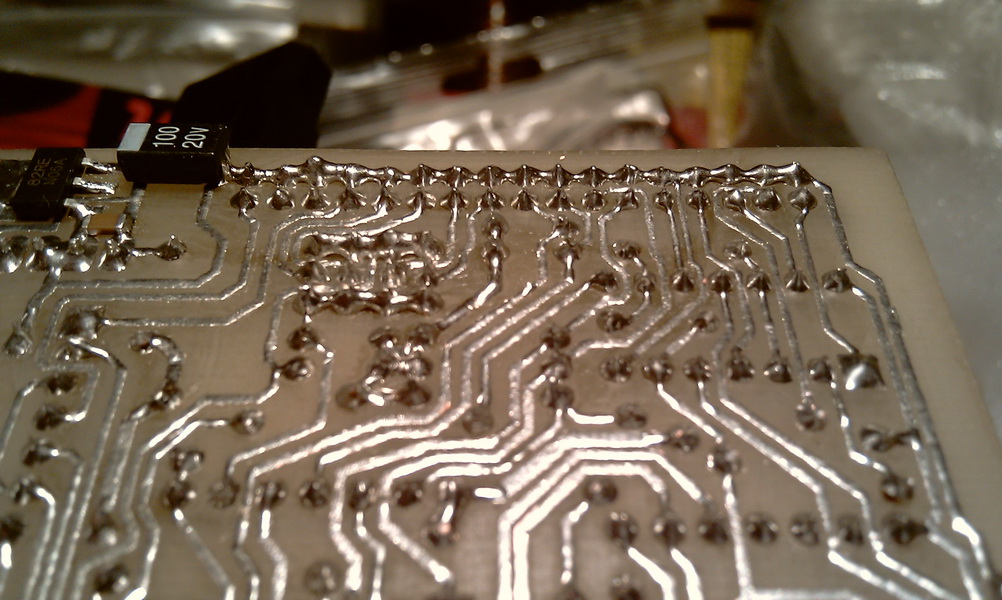 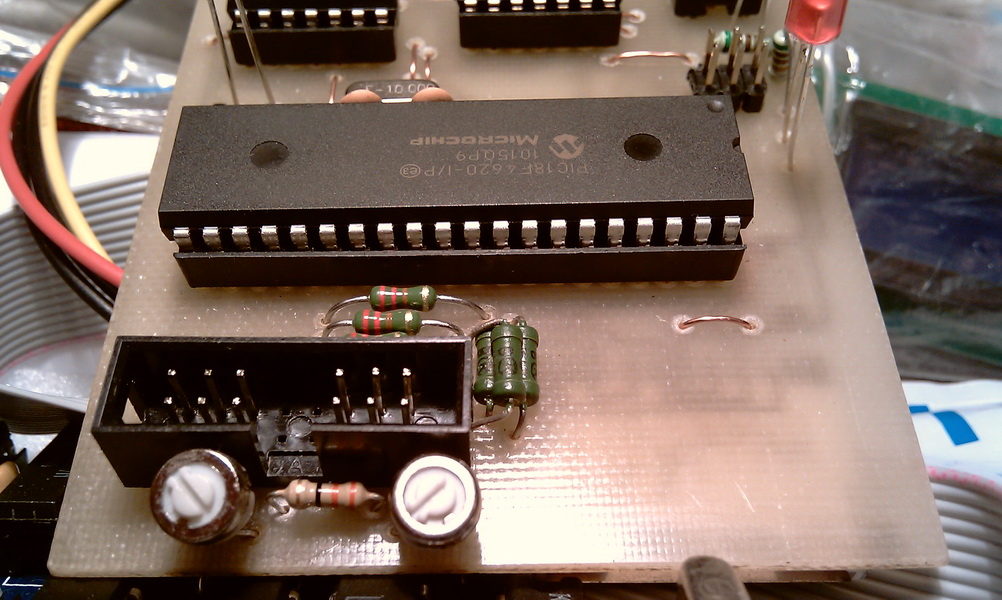 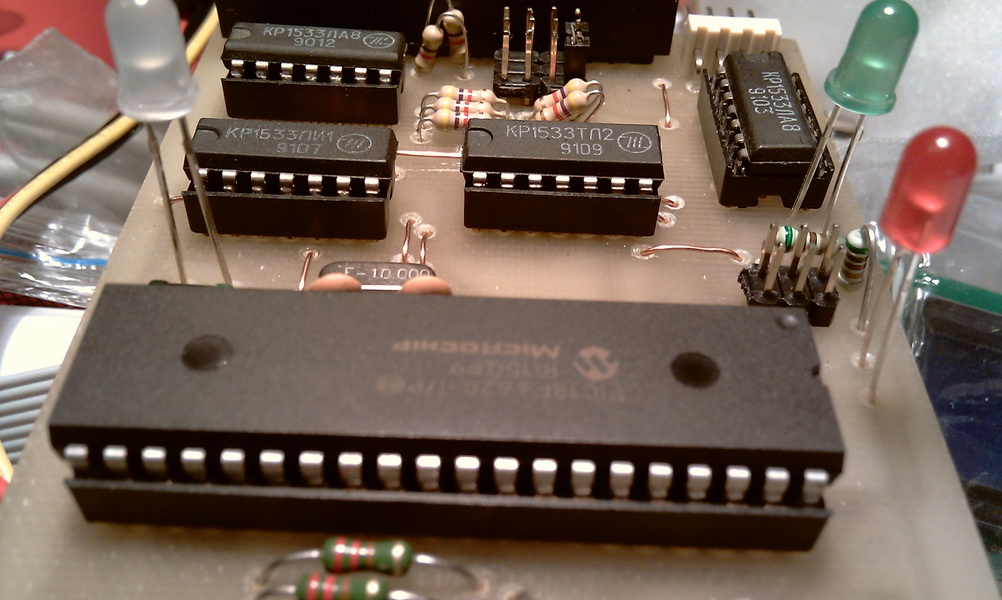 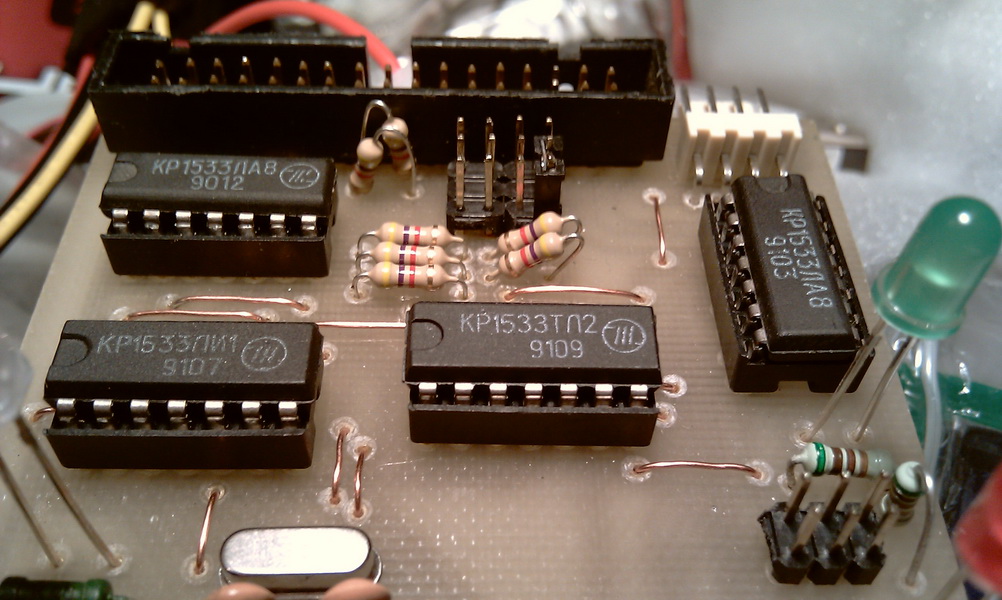